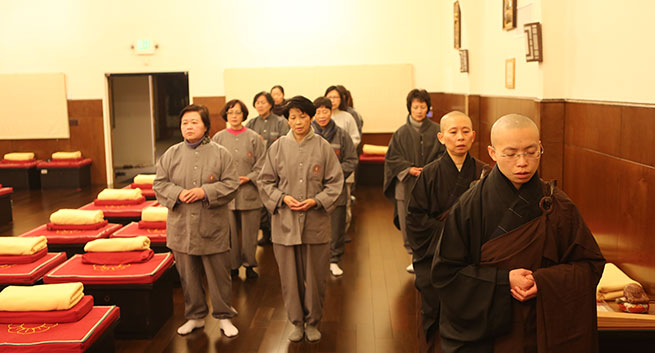 The practice of Buddha dharma is not based on discursive thinking; one should not take what he sees, hears, perceives and thinks as definitive. One must restraint oneself in order to stand on firm ground and take each step with a calm mind abiding in the principle of the teaching, then all obstructions will be removed, and great liberation and freedom will be achieved as we repay the benevolent blessings from our parents, teachers, the community, and all beings, and bring salvation to the three woeful states of existence.

Expounding the Dharma requires vast mind capacity, strict observance of the precepts, wisdom, compassion, spiritual realization, skillful means, continuous refinement and training, and most importantly one must resonate and go deeply in the teaching with a singular focus.

This solemn task is beyond merely researching the Internet and passing along to others what one considers to be good information. Even worse is where one considers spreading speculative ideas to others as propagating the Dharma. Doing so is to mistake confusion for breadth of knowledge and cleverness for realization. A disciple must first enter the lineage of a teaching, deepening and immersing oneself in it until breaking through the Initial Gate, the Second Gate, and the Final Prison Gate. After the fetters of false views have been dispelled and the fetters of habitual tendencies are gradually purified, one inquires deeply into the core of sutra teachings, then one may carefully expand and absorb the views and realizations from different lineages and sects. Before reaching this stage, studying teachings from other sects are at best a form of distracted and varied practices.

In the lineage of Zen, the moment a thought arises one becomes aware, and that awareness instantly terminates and empties that thought. One ceaselessly inquires and penetrates into his primordial nature, breaking through barriers after barriers until he is firmly established on that singular, upward, straight Path to the truth. Other than this, all considerations are nothing but the birth and death of the discriminating consciousness.

Training a disciple is like treating an eye disease with a golden acupuncture needle; a slight error can injure and destroy the eye itself. To administer a cure, one must know clearly the name of the medicine, its energetic quality, quantity, combination, conflict and synergy, preparation procedure, protocol of taking it and various dietary prohibitions. Any mix-up in this process will not only fail to deliver a cure – even with the highest quality of medicine – but also increase toxicity. In the practice of Zen, one must avoid distracting the mind and dissipating the energy of one’s effort. If the mind is still covetous and grasping, a practitioner will eventually descend into the ranks of those trapped in discursive thinking and distracted and varied practices.

Without the urgency to end birth and death, the profundity and severity of birth and death cannot be appreciated; without genuine practice and solid realization, all teachings will turn into games of mental discrimination. This is true of individual practice and even more so for in the task of teaching and liberating all sentient beings. Most people like to present themselves as teachers yet never honestly assess their own qualification. They do not know the progressive stages of the Dharma and the purity and defilement of phenomena. Therefore, they must exercise caution, treading carefully as if on thin ice when expressing their own view.

Ordinary beings lack awareness; they know neither who they are nor who their teacher is. To speculate the teacher’s meaning is like attempting to measuring the vastness of the ocean using a ladle with no hope of ever arriving at the truth.

The path of individual cultivation is far from over,
How can one attempt to benefit others;
If one knows not to focus on his own affairs,
The deluded mind wanders endlessly in speculative thoughts.

One’s own task has not completed,
Extraneous words benefit no one;
Essence is to be realized though ‘no-mind’,
Don’t turn teachings into trivial talk.

A disciple must know – before the barriers broken, attachments severed, delusion dispelled, awakening realized, emptiness perfected – that even the most wondrous philosophical discourse is nothing more than speculation, not real. A disciple in every utterance and conduct of the four dignities – sitting, standing, walking, and lying down – must be measured, cautious, restrained and devoid of all discursive speculation.